In Yu Hong’s Virtual Reality artwork She's Already Gone, the viewer finds themselves in the middle of four moments, traveling through the life of a female character from her birth to her old age. The narrative follows differing timelines as the life and aging of the protagonist moves forward while history goes backwards. Whereas her birth takes place in a modern hospital, the subsequent scenes take her and the viewer further and further back in time, until reaching a shamanistic ritual in the earliest known period in Chinese history. Each scene is painted by the artist by hand and adapted into Virtual Reality, the visible brush strokes adding a layer of physicality to the virtual world and creating an exchange of virtual and real matter in the piece. 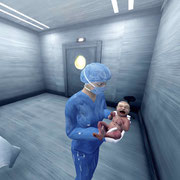 Yu Hong was born in 1966 in Xi’an, China. In the 1980s, she studied oil painting at the Central Academy of Fine Arts (CAFA) in Beijing, and graduated with a post-graduate degree from the oil painting department in 1996. Since 1988, she has been a teacher in CAFA’s oil painting department. The core subject of Yu Hong’s paintings has always been human nature, with a focus on the growth and existence of a particular society and the world at large. Yu Hong’s painted figures express the feelings and self-analysis of people thrown into the reality of society. The spirit of Yu Hong’s creation most often arises from her personal life and the surroundings of quotidian existence, constructing a world which ingeniously fuses together perceptions of time and memories, as well as adeptly seizing the sporadic emotional evolution of human experience. Recent solo exhibitions include CAFA Art Museum (Beijing, China), Long March Space (Beijing, China), Shanghai Art Museum (Beijing, China), and Ullens Center for Contemporary Art (Beijing, China). Yu Hong has also had group exhibitions at Solomon R. Guggenheim Museum (New York, USA), Long Museum West Bund (Shanghai, China), National Art Museum of China (Beijing, China), New York Academy of Art (New York, USA), and Boston Museum of Fine Arts (Boston, USA).