A VR city simulation system to explore multi-user communication for a debate about the future of the city.

The performative VR city simulation system "Berlin - Cyber City" was created as a reaction to the fall of the Berlin Wall. The intention was the staging of an interactive space for debate on the future of the city. To do this, the VR paradigm – the real-time movement in an immersive environment for a single user - should be extended into a communication space for several users. The classic VR interface - data glasses and data glove - was replaced by a modified visual and navigation system. Gathered around an interactive table with the aerial view of the city, the visitors seem to be in the middle of the virtual city that appears behind it on a room-sized projection screen. With a sensor in hand, the visitor moves over the aerial image and thus creates a 3D spatial image of the virtual city. It is as if the VR glasses become walkable. The magnetic field sensor acts as a mediator between analogue aerial photography and virtual data projection, which becomes a reference level for visitors' communication. On the one hand perception of the simulated 3D space is reduced to a two-dimensional image plane, on the other hand a common experience is created through the interaction of the participants. It is a cognitive form of immersion through participation. The virtual city stimulates the participants' flow of thoughts, it creates a common thinking space through the use of VR technology and thus brings the visitors from East and West Berlin into conversation with each other. The entire 3D city model could also be entered with the classic VR set - data glasses and data glove. This was particularly interesting in order to compare the various designs submitted for the  architectural competition Potsdamer Platz at the time.

Berlin - Cyber City is not available anymore. The work can be exhibited as a documentation with videos and pictures. The Berlin, Cyber City interface was further developed as a desktop VR tool in the work Responsive Workbench. 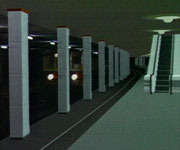 Monika Fleischmann and Wolfgang Strauss  are pioneering German media artists,  They founded departments for interactive media art such as ART+COM in Berlin, the MARS (Media Arts and Research Studies) – Exploratory Media Lab and the eCulture Factory within German research institutions such as GMD (Gesellschaft für Mathematik und Datenverarbeitung) and Fraunhofer Society. In 1992, they received the Golden Nica for Interactive Art of the Prix Ars Electronica for „Home of the Brain“, the first artistic Virtual Reality installation. They are recipients of the 2018 ACM SIGGRAPH Distinguished Artist Award for Lifetime Achievement in Digital Art. Their groundbreaking works on Virtual and Mixed Reality, Semantic Visualization and intuitive interfaces such as "Berlin-Cyber City", "Home of the Brain", "Liquid Views", "Energy-Passages", "Semantic Web" or "PointScreen" have been shown worldwide in art and science festivals, in museums and galleries. "Digital Sparks", an academic network and competition archived on the media art learning platform "netzspannung.org", is, like all their work, part of the collection of the ZKM | Zentrum für Kunst und Medien Karlsruhe.