Two Times Four is a virtual reality video-installation from the series ‘Inside geometry double language’, I started on 2015 (within more than 35 VR figures created until now). “Two times four” is composed by twelve google cardboard orchestrated from ceiling to draw the infinity symbol. The whole VR series ‘Inside geometry double language’ explores architecture, surfaces and places as interface; allowing audience, thru the 3d-viewers to take a journey beyond the physical space, crossing over twelve abstract rooms in continuous transformation (inspired me by Rothko) emitting vivid super-objects mixing geometries, painting and sculpture praxis. The virtual reality animations inside the 3D viewers play with the concept of infinite, including infinitely large and infinitely small (micro ands macro dimensions), thru minimalist nuances and conceptual degrees generated by the shifts of the geometry language, that in the virtual-reality-liquid dimension overturn completely Cartesian coordinates.

From the series: Inside the Geometry  - Double Language 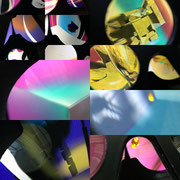