The viewer encounters seven sculptural objects suspended in a confined gallery space. The grainy black and white walls of the enclosure suggest the evocative texture of film stock, while the binary code scrolling across the ceiling betrays the digital composition of the virtual world. The sculptures themselves are distorted 3D renderings of bodies created by scanning moving images from film and television, their skins created by means of hand-painted UV textures. Depending on the visitor’s point of view, the objects shift from resembling familiar depictions of powerful, young heroines to evoking grotesque cubist portraiture based on the erratic success of the scanning process. In addition to their changing visual composition, the objects have distinct aural signatures that comprise the piece’s soundscape, underscoring the multisensory fabrication of space. As visitors virtually touch these objects, the hand controllers rumble until the sculpture fractures into digital fragments, producing momentary static and finally silence. After each of the objects disintegrates, the virtual space disappears and the viewer is returned to the beginning of the piece. 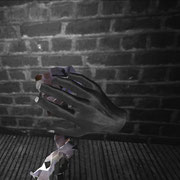 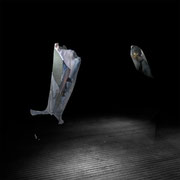 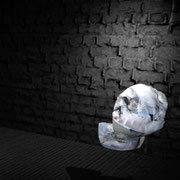 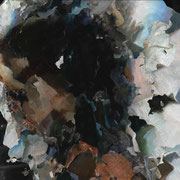 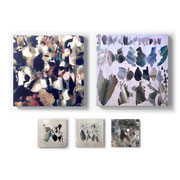 Lauren Moffatt is an Australian artist working between video, performance and immersive technologies. Her works, often presented in multiple forms, explore the paradoxical subjectivity of connected bodies and the friction at the frontiers between virtual and physical worlds. She creates intricate universes, occupied by misfits and recluses and populated by strange devices and artefacts. These speculative fictions and environments are conceived using a mixture of obsolete and pioneering technologies, and informed by the history of cinema and broadcasting. Lauren completed her studies at the College of Fine Arts (AU), Université Paris VIII (FR), and at Le Fresnoy Studio National des Arts Contemporains (FR). She lives and works in Berlin.