Exploring Extreme Surfaces And Terrains is a series of virtual reality video sculptures made by diverse materials: Google cardboard, Plexiglas and 360° geometric animations in continuous transformation deconstructing and reshaping extreme and minimalist, tangible surfaces and wireframe terrains. The 3D visor incorporated into the sculpture-surface (as part of the VR video sculptures) projected 360° onto the rough surface, which gives the three-dimensional spatial extension on geometric forms with an apparently icy and impersonal kind of abstraction. My VR video-sculptures explore surface and structure as lively interface; allowing audience, thru the 3d-viewer inside to take a journey beyond the physical space, crossing over abstract animations in continuous transformation mixing minimalist nuances and conceptual degrees generated by the shifts of the geometry language, that in the virtual-reality-liquid dimension overturn completely Cartesian coordinates/axis. It is through the audience experience that my VR video-sculptures addresses us to the paradox of the modern space-time condition, diluted even more in between physical and liquid space.

So, the spectators become blind and ultra-seeing at the same time perceiving a kind of abstract-space that is meant the pure shape of intuition. 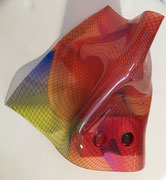