A VR scene as preview to the first chapter of Castaneda's upcoming VR experience Levels and Bosses, where two entities, one humanoid and one the-environment are in perpetual encounter. Through button presses virtual reality participators can teleport around the scene for varied perspectives and manipulate the speed of time. The VR headset may be adorned with a sculptural garment that participators don as cyber-camouflage to a mixed reality setup, super imposing live real-world footage to the virtual environment. 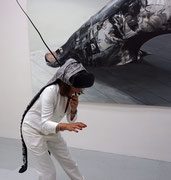 Leo Castaneda is an artist working in the intersection of virtual reality, gaming, performance and interactive sculpture. Castaneda's work deploys and deconstructs the socio-economic, racial, mythological and post human anatomies embedded in the structure of video games. Castaneda received his BFA from Cooper Union in 2010, and in 2014 received his MFA at Hunter College. Residencies include SOMA Summer in Mexico City attended through the Cisneros Foundation (2014), "Of Games III" at Khoj International Artists Association, New Delhi India (2015), and the Bronx Museum AIM program (2017). He has also attended a semester abroad in Universitat de Barcelona, Spain, and studied at New World School of the Arts in Miami.

I produce works ranging from paintings to experimental video games that evoke spaces and forms between abstraction and science fiction. Pieces appear both alien and familiar and filtered through subdued palettes that place viewers in unknown timelines. Minimalist machines meet scenes of ambiguous origins across feedback loops of analog to digital translating drawings and paintings into interactive virtual worlds through video game design software. The cycle continues as images of virtual spaces and digital process renders become a reference for paintings and sculptures. Installations include handmade works and digital experiences simultaneously, giving sculptures function as machines through which viewers enter the virtual worlds.

Works are organized under the linguistic structures in video games, where words such as “Levels”, “Bosses”, and “Items”, recall hierarchies of power, mythologies, corporations and more. Through these labels, I aim to bridge qualities of the gaming and Art industries such as gaming's interactivity and malleability of the self, with the tangibility and layered significance of Art. Also, gaming's innately global platform of inexpensive and endless reproduction in contrast to Fine Art's relationship to scarcity and high commercial values.

Unconscious origins of the work come from familial exposure to Latin American modernism in Art and Architecture as well as the sublime of nature growing up in Colombia. Conscious drivers, however, analyze the global platforms of Videogames, Animation and Hollywood movies. “Concept art” that plans and storyboards games and movies focused my early artistic aspirations and is now an integral part of my artwork's conception and conceptual intent, now aiming to be a video game in itself.