"Into the Land Art" is a virtual reality series of artworks constituted by diverse site-specific installations thru the virtual reality, I started on 2015. “Earth spiral” is constituted by twenty Google Cardboards and related smartphones playing twenty VR animations. In "Earth spiral" the Google cardboards orchestrate on ground a spiral figure, which was inspired to me by Smithson’s “spiral jetty”. My spiral is totally participative so, inside each 3D viewer, the audience can take a journey beyond the earth, over the physical place, diving into a liquid dimension that strikes the Cartesian coordinates. "Earth spiral" is an artwork that explores nature as interface, transforming it as participative, alive and vibrant. In fact, it is thru the audience experience that "Earth spiral" highlights the paradox of the modern space-time condition that nowadays is diluted between physical and virtual space. “Earth spiral” uses new technologies to comprise its intrinsic semantics, often subverting the medium itself. So, spectators thru the 3D viewers bow down to nature while kneeling to technology and use it to see in depth, just over the ontological vision of nature itself. So nature appear animated by its own metaphysics, existing beyond its own functionality. On 1999 I coined the term "Super-place" for Live Architectures artworks (and afterwards also for all VR series), to characterize dynamic places which project the spectator into a never-ending oddity reality. The VR animations inside “Earth spiral” show a modified nature using twenty specific google earth maps, containing bizarre earth memories, greens turned into liquid super-objects, geometric scheme of views, all made by an ontological vision beyond the pure cognition of thought. 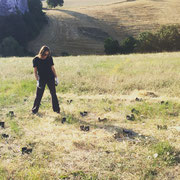 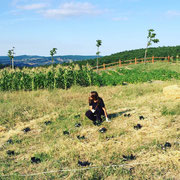