Entering the virtual reality of Lemmerz’ La Apparizione, one encounters the Crucified One. A golden tortured body, released from the cross and floating in deep darkness, his wounds revealing flesh and blood behind the glistening metal surface of his skin. This must be how one pictures a sacral peepshow. Exposed to the viewer through the extreme visuality of the VR medium is a fusion between the suffering Savior and a bodybuilder bordering on vulgarity. In this space in between pathos and irony, between fake and real, the golden “Silver Surfer”, Jesus Christ, endures the bodily event of death – this death that we live. Throughout history, the representations of the Crucifixion of Christ take many shapes – from the suffering body and sacrifice in the Middle Ages to the conquering divine anatomical Christ in the renaissance. In the work all different depictions of Christ seem to merge across high and low culture, constituting one ultimate icon. A chimera of history just returned from the future, his breath and sound simultaneously as human as divine, as post-human as post-divine. This space of Virtual Reality is indeed a manipulated space determined by how our brains construct the reality. As a space of imagination it operates on a level between form and formlessness, as if the living metal could suddenly change shape. At the same time it enables an aestheticization of the horrific pain, the spilling vomit and blood appearing as liquid gold, leaving the irrational psyche in a shattering state of perception but also delight.

Visions, dreams and out-of-body experiences are phenomena, which have defied our perception of the real for a long time. As a new medium and technology, Virtual Reality probes human consciousness, one of the last frontiers of neuroscience and philosophy. Taking place at this threshold of reality through the medium, Lemmerz’ depiction of Christ questions the very nature of existence, the feeling of being there, our sense of self. 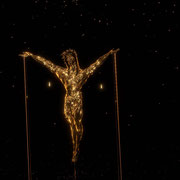 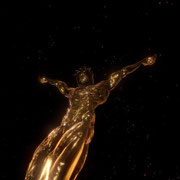 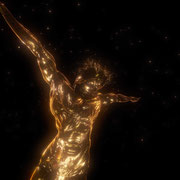 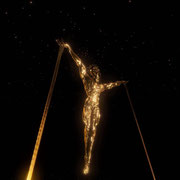 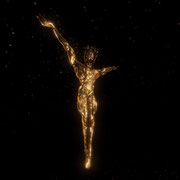 Christian Lemmerz was born in Germany in 1959. Today he lives and works in Denmark and Italy. From 1978 to 1982, he studied at the Academy of Fine Arts in Carrara, Italy, and from 1983 to 1988 at the Royal Danish Academy of Fine Arts in Copenhagen. Lemmerz expresses himself in a variety of media, from film, performance, sculpture, drawing, painting, to installation works. Lemmerz has explored highly unconventional materials, such as his early organic sculptures made of margarine, or a work consisting of slaughtered pigs exhibited in glass cases. He also works with traditional materials, ranging from bronze to marble. Many of Lemmerz’s works focus on taboo-related themes, taken from contemporary, as well as historical events, where suffering, death, identity, and existence are central themes. The human body and the medium of sculpture have been particularly important to Lemmerz’s work, enabling the viewer to become an active participant. Lemmerz has had major solo exhibitions at Randers Art Museum (Denmark), SMK, National Gallery of Denmark, Aros (Aarhus Art Museum, Denmark), Cisternerne (Copenhagen, Denmark), and has exhibited in Stavanger, Beijing, New York and Sao Paulo.