VRANK is an interactive virtual reality installation that experiments with human-technology interactions. The main components of the installation are VR glasses connected to an animatronic (electro-mechanically animated) head, which is equipped with a Binaural Stereo microphone, a BMR speaker and two webcams. The conceptual starting point goes back to the Mechanical Turk a simulated chess robot from 1769. Staged as a bust, the animatronic head is only brought to life in the exhibition context through the use of VR glasses and initially suggests to the viewer the impression of a human-like machine with social intelligence, similar to the Mechanical Turk from Wolfgang von Kempelen. In this immersive out-of-body experience, the bust comes to represent the participant. This interaction implies a certain fusion of the human and the machine, body and data, consciousness and identity. As for this transformation of the human to cyborg and the hybrid existence of man-machine, the installation makes action/interaction perceptible from a machine’s point of view. The supposed artificial intelligence of the interactive installation can be perceived from several perspectives: that of the one wearing the VR glasses, that of the one observing bust, and that of the outside observer. What do people expect? How does it feel to be perceived as AI? ...
Roomscale:  bust: 160cm x 33cm x 65cm(HxBxT) 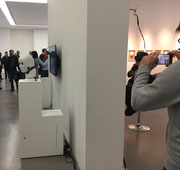 Voigt&Voigtmann is a collaboration between Alexander Voigt and Jana Voigtmann. One of their joint projects is the interactive closed-circuit video installation "Scotoma", which was made for the CITY VISIONS JENA - light and science festival (2015) in Jena. Alexander Voigt (*1975) is a freelance media designer. He lives and works in Leipzig, Germany. His specific areas of expertise include the development of customized virtual and augmented reality apps on PC, Android and iOS for relative 3D visualization with Unity 3D. Jana Voigtmann (*1984) lives and works as an artist in Leipzig, Germany. In her works she explores with a variety of mixed medias (graphics, video, installation and kinetic plastics) the network of relations between human and media communications as well as their closeness and distance and mutual interactions under the influence of information processing.