A twist on popular “militainment” shooter video games, Project H.E.A.R.T. invites the viewer to place their fingers on a custom biodata gathering device, and then summon their enthusiasm in order to direct their avatar, Yowane Haku, in “combat therapy.” The biosensor device gathers the human player’s positivity and energy to drive Haku’s voice forward to boost morale as soldiers battle not only against a group of enemies, but also against their own lack of confidence and rising anxiety. Fans of the Vocaloid characters may recognize Haku as the “bad copy” of Japanese pop celebrity Hatsune Miku, a holographic personnage that invites her fans to pour their emotional and creative content into her virtual voice. The colorful landscape of the game was built from from geopolitically resonant sites found on Google Maps, creating a dreamlike background for the warzone.  In-game dialogue wavers between self-righteous soldier banter typical of video games, and self-help, bringing the VR participant to an interrogation of their own emotional body in a VR space that conflates war, pop music, video games, emotional investment, and virtual-movement induced nausea.

Documentation of the exhibition: Photography by Toni Hafkenscheid courtesy of Trinity Square Video (2017)

Screenshots / artwork: Courtesy of the artist 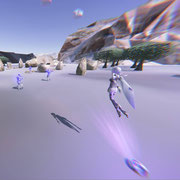 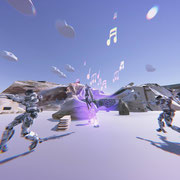 Erin Gee is a Canadian artist who explores digital culture through metaphors of human voices in electronic bodies. Working across new digital interfaces, avant-garde vocal music composition, robotics, and emotional biosensing, Gee's practice is distinguished by her interdisciplinary approach to art, music, and technology. She received an MFA from Concordia University, Montreal (2014), and has exhibited and performed music in North America, Australia, and Europe. Her research in sonification of physiological markers of emotion has been featured by Scientific American, VICE, MusicWorks, Canadian Art, and the National Post.

Alex M. Lee is a digital artist who utilizes 3D animation, game engines, and the potential of simulation technology in order to visualize and abstract our understanding of time, space, and light - culling from concepts within science, science fiction, physics, philosophy, and modernity. He received his BFA (2005) and MFA (2009) from the School of the Art Institute of Chicago. He is associate professor in the Digital Arts & Sciences Program at Clarkson University located in Potsdam, NY - a private science and engineering university located north of the Adirondack Mountains where he divides his time between Potsdam and New York City.